Houston Restaurant Weeks (HRW) is back for its 19th year with enough new restaurants to fill the Astrodome. This year’s dining-for-charity fundraiser is from August 1 through Sept 6 — just over a month —  and it is the largest event of its kind in the United States. Over 200 restaurants participate by creating prix fixe menus at set prices, and a portion of the sales benefits the Houston Food Bank.

Lunch and brunch cost $20 and generate a $1 donation, while dinner can be $35 or $49 and includes a $3 or $5 contribution, respectively. The Cleverley Stone Foundation, led by the late HRW founder’s daughter, Katie Stone, coordinates the event. (Sadly, Cleverley Stone passed away after a fight with uterine cancer in May 2020.) The event has raised $16.6 million for the Houston Food Bank since its inception, which currently serves nearly 93,000 meals weekly to Houstonians. That mission is particularly critical right now, as the COVID-19 pandemic has driven an increase in demand amid restaurant closures and job losses.

Every year brings a new crop of restaurants participating in HRW for the first time, and 2021 is no exception. HRW is also great for participating restaurants, having turned the traditionally slow month of August into a busy one. (Granted, the month isn’t necessarily easy on restaurant employees, so be kind, and don’t forget to tip your server on the value of the meal.)

For a full list of participating restaurants, visit the HRW website, which describes the menu choices, offers searches by part of town, type of cuisine and other criteria, and indicates when dishes are vegetarian or gluten-free. For the purposes of this list, some of the restaurants noted below may have participated in years past, but not in 2020.

Fresh, pillowy beignets are a must do at Acadian Coast. Photo by Sandra Crittenden.

Acadian Coast, 2929 Navigation: This seafood-focused restaurant in the East End connects the Acadian Creole cooking of Louisiana to the Acadian region of Canada. The Navigation newcomer is quickly becoming a neighborhood favorite for its Chicken and Andouille Gumbo, classically prepared with a Cajun dark roux and Shrimp and Alligator Sausage Jambalaya which pairs colossal shrimp with alligator sausage and  traditional sauce piquant. Both dishes are offered as part of Acadian Coast’s inaugural Houston Restaurant Weeks menu.

Baja Sur Fresh Mex  26435 Kuykendahl: This new concept from John Amato and Jason Daly offers upscale Tex-Mex in a lively environment — including a giant lawn with cornhole and Adirondack chairs. Enjoy the great outdoors with an HRW menu that includes Flautas filled with roasted chicken and served with  guacamole alongside or Blackened Fish Tacos of mahi mahi, avocado and signature green sauce. 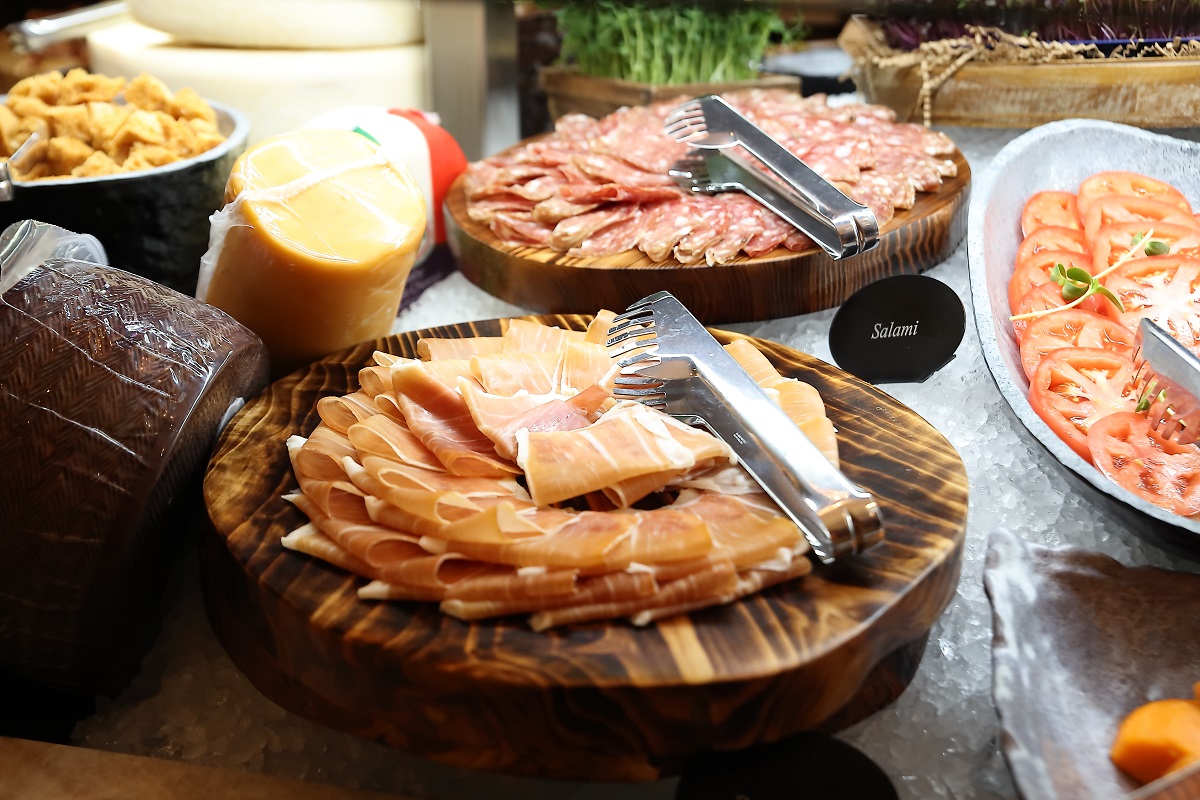 The salad bar at Casa Do Brasil features a diverse selection of meats, cheeses and vegetables. Photo by Quy Tran.

Casa Do Brasil, 2800 Sage: This authentic churrascaria is serving lunch and dinner during HRW. Lunch includes an extensive salad bar of over 40 items, such as seafood, imported cheeses, cured meats and housemade salads. Dinner includes the slow-roasted, endless meat selections typical at churrascarias. 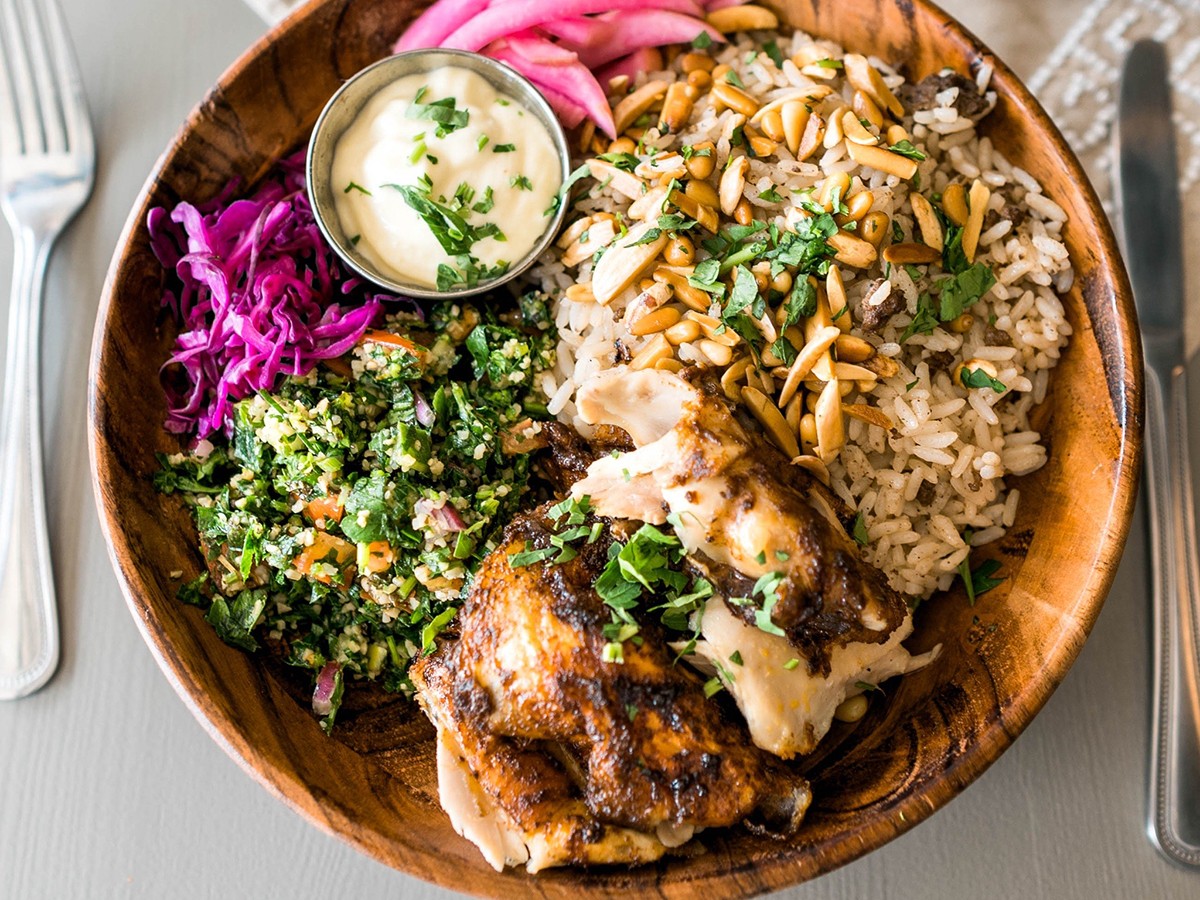 Craft Pita, 1920 Fountain View: The Mediterranean cuisine at this Tanglewood-area restaurant sets itself apart by incorporating ingredients from local farmers, ranchers and bakers. The olive oil, however, comes from the owner’s family farm in Lebanon. Among the offerings are Rotisserie Chicken with french fries and Chicken Bowl served with pita bread.

Da Gama Canteen, 600 North Shepherd: This new concept by RISHI Hospitality, helmed by the husband-and-wife team of Rick and Shiva Di Virgilio, draws inspiration from the area colloquially called “Portuguese India” and melds it with Houston culinary sensibilities. The HRW menu offers a unique blend of cuisines, such as Cassava Bomba, a croquette of yucca with pimiento cheese and tomato neem chutney, and Lamb Keema Tartine made with ground spiced lamb and vegetables baked on house naan with whipped ricotta. Da Gama also has a selection of organic and natural wines to drink alongside your meal. 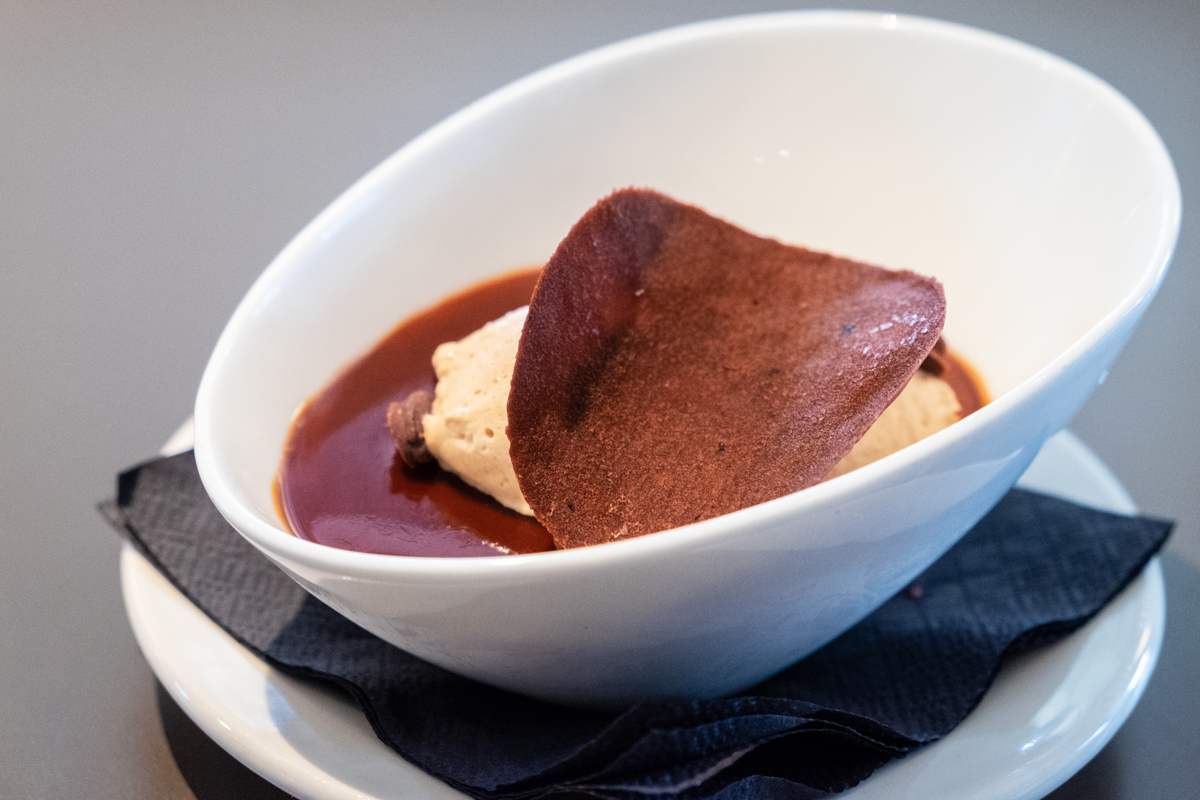 Dak & Bop, 1805 West 18th Street: In Korean, this restaurant name translates to “Chicken & Rice.” However, Dak & Bop’s latest incarnation in the Heights has so much more to offer, and diners might be surprised at the chef-crafted menu and beautiful platings available for very reasonable prices (even when it’s not Houston Restaurant Weeks). Dak & Bop’s dishes  combines several culinary influences, including Asian and Mexican, but it’s certainly best known for its double-fried, Korean-style chicken  You can sample the famous technique on the HRW menu via the Dak Sandwich stuffed with with fried chicken, yangbaechu slaw, house pickles and kombak sauce, or an order of six fried chicken wings (they’re bigger than you might expect) with your choice of soy-garlic, medium-spicy, hot & spicy or sriracha-honey-lime sauces. Don’t miss the beautiful and innovative desserts. Davis Street at Hermann Park, 5925 Almeda: “Rooted in Southern hospitality with a nod to world class sophistication” is how executive chef Mark Holley’s restaurant is described on its website. Holley has decades of experience as a Houston chef, and he’s built a loyal following thanks to his work, which has included Brennan’s of Houston, Pesce and Holley’s Seafood Restaurant & Oyster Bar. A few selections from the HRW offerings include Aguachile Crudo, made from sea scallops and cucumber ribbons, and Berkshire Pork Chop with pappardelle pasta, rosemary, roasted tomatoes, crème and fresh fig-jalapeno relish. 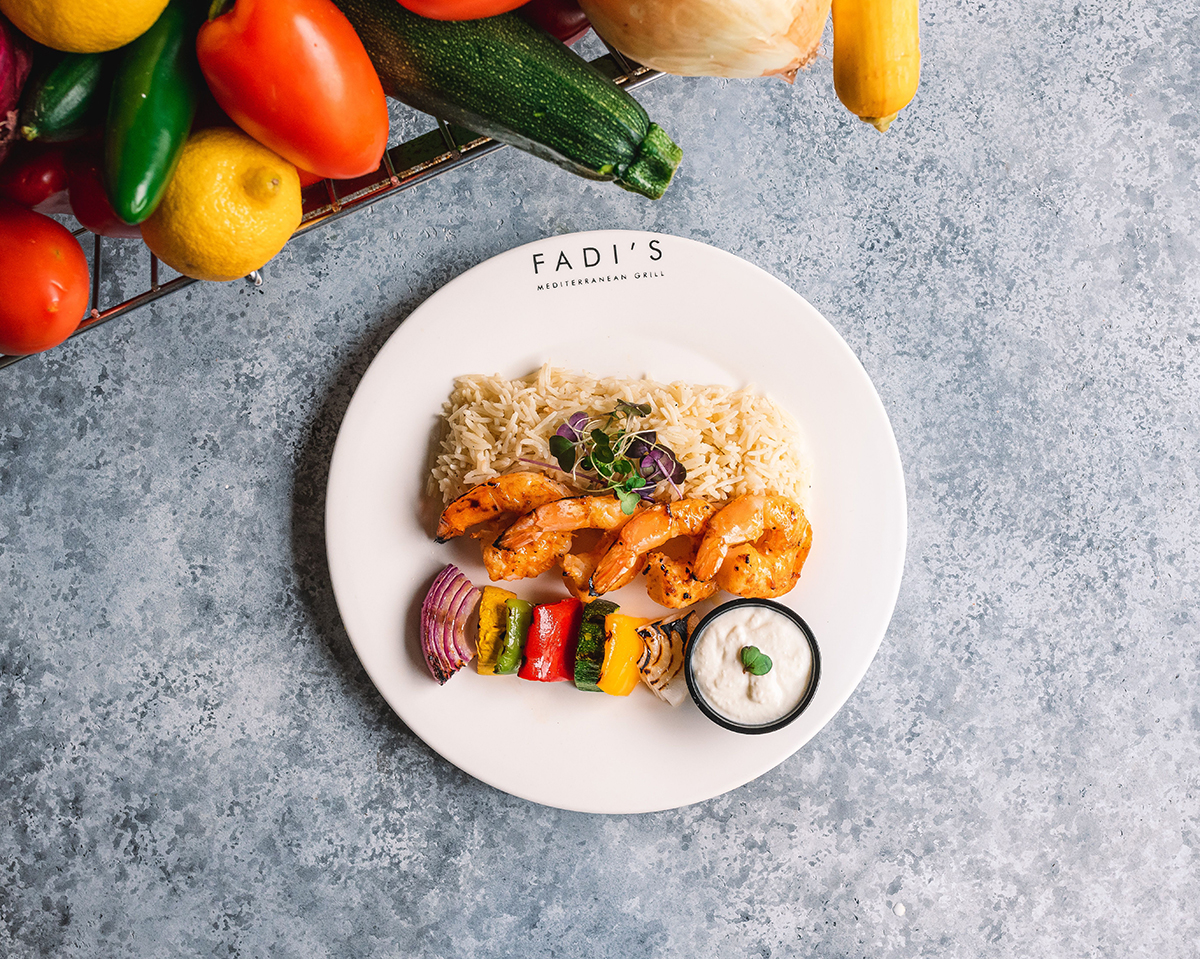 Fadi’s Mediterranean Grill, multiple locations: For over 25 years, chef and founder Fadi Dimassi has been serving cuisine based on authentic, family-owned recipes from his hometown of Saida, Lebanon. With such a long history in Houston (and now, Dallas), Fadi’s is a long overdue and very welcome addition to Houston Restaurant Weeks. The HRW menu includes kabobs, including the Shrimp Kabob with rice and grilled vegetables, and the second course is healthy salads such as the Quinoa or Kale, or the very popular fried cauliflower. For dessert, choose from among the perpetual favorite, baklava, or the intriguing lady fingers or rice pudding. Fegen’s, 1050 Studewood: Chef Lance Fegen’s namesake restaurant is serving “old school American” lunches and dinners with courses such as Beef Carpaccio in truffled Sicilian olive oil and Chicken and Portobello Mushroom Ravioli. To drink alongside, consider the beautiful martini, presented with accoutrements of lemon and olives. 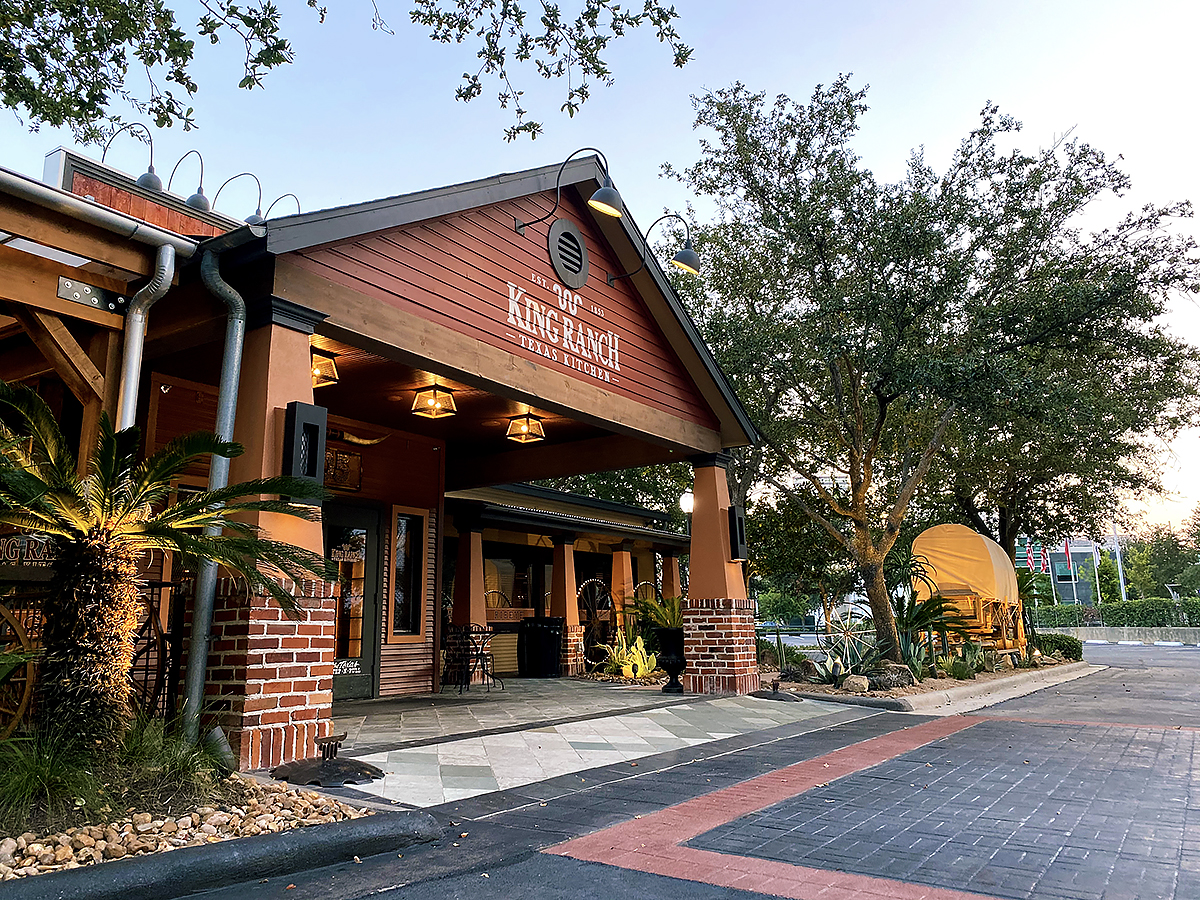 King Ranch Texas Cuisine, 1605 Post Oak: Legendary King Ranch, the largest ranch in Texas, has teamed up with Landry’s to honor the infamous cuisine of Henrietta King, whose southern hospitality helped make the ranch famous. The Brisket Queso has made it onto the HRW menu as well as an 8-ounce, center-cut top sirloin.

KISS Houston, 2313 Edwards: This is the latest restaurant addition to businesses operated by Clé Group, which became the subject of national scrutiny for packing its clubs, such as Spire and Clé, at the height of the pandemic. KISS Houston, located in the former Póitín spot in the Shops at Sawyer Yards, offers what’s dubbed as “vibe dining”. Acclaimed French Master Chef Frederic Perrier (best known for Aura Brasserie in Sugar Land, which he sold) developed the HRW menu. It  features Southern comfort food kicked up with Cajun heat. . A few of the dishes that patrons can choose include Crab Beignets featuring beer battered crab cakes, chipotle aioli and shaved radish, and Chicken “Ya-ya” Pasta with blackened chicken, crawfish and andouille atop housemade fettuccine. The crab cake at KP’s Kitchen. Photo by Phaedra Cook.

KP’s Kitchen, 700 Town and Country: KP stands for Kerry Pauly, former managing partner for Benjy Levit. Pauly is now applying his skills and experience to serving elevated fare in Memorial. There is also a small market offering local goods. Guests can choose from classic dishes such as the crab cake or healthy options like Farro Salad.

Kokai, 2404 Texmati: This restaurant started in  Maracay, Venezuela, and the owners say it was the first Japanese restaurant in that area. These days, there are restaurants in Miami, Venezuela and Houston. It’s HRW menu may feature some of the most novel cuisine of all the participants, as it includes Kokai’s non-traditional sushi served with an Andean perspective.  Try the Maguro Cocktail with thin slices of tuna, avocado in ponzu and eel sauce or the Shrimp Yakisoba, Japanese stir fried noodles with vegetables and grilled shrimp. NoPo Cafe Market and Bar, 1244 North Post Oak: Named for an acronym of North Post Oak — thought of by owner Benjamin Berg as both a street and a neighborhood — this is all day market and bar opened very recently and is serving breakfast, lunch and dinner. It also hosts a market with staples for nearby residents. Backed by the Berg Hospitality Group, some examples of the dishes NoPo is offering on its HRW menu are Fritto Misto, a dish of fried calamari, shrimp and mussels, and Black Cod Miso, a black cod marinated and braised in sweet miso sauce. Yellowfin Tuna Crudo at The Nash. Photo by Phaedra Cook.

The Nash, 1111 Rusk: This modern American restaurant serves happy hour and dinner in The Historic Star, formerly known as the Texaco Building. It features a dramatic floor-to-ceiling bar and open kitchen. Chef Omar Pereney describes the cuisine as a “love letter” to American food. A few of the selections include Yellowfin Tuna Crudo, Pan Seared Snapper and Lemon Shrimp Bucatini. Rim Tanon’s Tom Yum is not heat-free, but most palates should be able to handle it. Photo by Phaedra Cook.

Thai Cottage, multiple locations: Restaurant founders (and husband and wife) “Chai” and “Ting”  came from Bangkok to California in 1987. They credit their love of cooking for Thai Cottage’s success, and now have nine locations in Texas, eight of which are participating in HRW. Among other dishes, the restaurants are offering Papaya Salad and Roasted Duck Curry prepared with red curry paste, coconut milk, pineapple chunks, tomatoes and basil, and served with steamed rice. Not Our Ma’s Eggrolls at Xin Chao. Photo by Ryan Baker.

Yi Peng, 798 Sorella: The cuisine of Northern Thailand is honored in this restaurant named for a lantern festival in Chiang Mai. For the HRW menu, owners Jett and Jira Hurapan have added Tom Yum Dumplings, an open-face shrimp dumplings with enoki, kaffir lime in spicy lemongrass broth and Baked Half Shell — a baked garlic crusted scallop on half shells with savory Thai chili salsa.

Issues to Do: Finest issues to eat and drink in Houston this weekend