Actions: Upcoming food and drinks occasions in Houston this week

The Loop Handcrafted Churros has found its way from SoCal to H-Town.

Here’s a look at this week’s hottest culinary events:

The local, women-led organization I’ll Have What She’s Have, which brings together chefs, hotel professionals and doctors to raise health awareness and improve access to health care, continues its Pro-Choice Summer 2021 happy hour series, a reaction to the extreme six-week abortion ban is due to come into force in the fall. The series runs every Monday in July and August and benefits organizations such as Planned Parenthood Gulf Coast, Clinic Access Support Network, the Lilith Fund, and others. Next up is the happy hour at Anvil Bar & Refuge, 1424 Westheimer.

Support the independent voice of Houston and help keep the future of the Houston Press free.

Ember & Greens, 9403B Katy Freeway, will be recognizing National Homeless Animal Day with a weeklong fundraiser and offering a special menu with $ 1 of each item donated to the Houston Animal Shelter BARC through Friday, August 27th. E&G quinoa bowls, apricot and rosemary lamb chops and more.

The PlumpJack Collection of Wineries and Mastro’s are jointly hosting a nationwide wineries dinner showcasing the iconic wine portfolio that will take place at 7 p.m. in Mastro’s restaurants in the United States (including Houston, 1650 West Loop South). The five-course menu features dishes like bone marrow with Alaska King Crab paired with the 2019 PlumpJack Reserve Chardonnay and a ribeye steak with creamed spinach and mashed potatoes paired with a trio of 2018 PlumpJack Estate Cabernet Sauvignon, 2017 CADE Estate Cabernet Sauvignon and 2018 Odette Weingut Cabernet Sauvignon. Tickets are $ 350 per person.

Guests are invited to a special Liberation de Paris wine dinner at Ouisie’s Table, 3939 San Felipe, which features a five-course menu of French-inspired dishes and five of the French wines, with special guest Jean-Francois Bonneté. The highlights of the menu include fried scallops with tarragon sauce, sole meuniere, duck confit with glazed peaches, Provencal lamb chops and pots de creme. Dinner starts at 6:30 PM and costs $ 79 per person plus tax and tip. Call 713-528-2264.

Theme evening in the UB Preserve

UB Preserv, 1609 Westheimer, brought its theme nights back on Thursday.

Due to increasing concerns about COVID, the Indie Chefs Community has postponed its two-week community food festival COMMUNE to March 2022. Until then, gourmets can get a foretaste at a number of COMMUNE preview events on Thursday, August 26th, Friday, August 27th and Sunday, August 29th. The events, with limited seating and spatial spacing, take place on an area of ​​7,500 square meters outdoors, including chef collaboration dinners, late night pop-ups, a “Jewish DelicaTexan” experience and more.

Pinstripes Houston, 3300 Kirby, ends its Summer BBQ & Brews Series with the beers from 8th Wonder paired with a grill on the patio. The fun takes place from 5 p.m. to 9 p.m. while guests enjoy balsamic BBQ ribs, pesto chicken, sliders, mac and cheese, watermelon, brownies, and more on the terrace for $ 40 per person bowling for an additional charge).

Opening at The Loop Handcrafted Churros 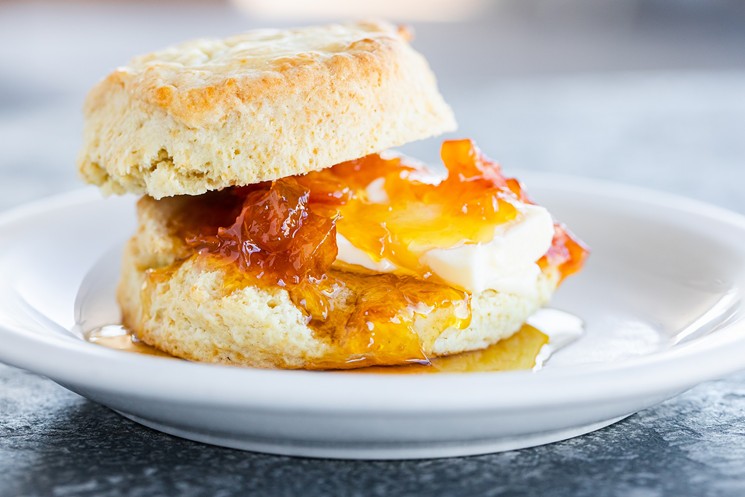 Dandelion Cafe is celebrating five years of palatability this Sunday.

Houston Restaurant Weeks are back, running until Labor Day as they support restaurants and raise funds for the Houston Food Bank. New in the line-up this year are exciting spots like Fegen’s, Xin Chào and The Nash. Search the entire library of participating restaurants and their HRW menus to start booking reservations now.

Burger of the month at Hopdoddy

Hopdoddy has made Beyond Meat its exclusive plant-based meat supplier at all locations; And to celebrate, the burger of the month August is Beyond a Reuben, a vegetarian version of the classic Reuben sandwich. Made from a Beyond burger patty with pastrami-flavored mushrooms, Gruyère cheese, Dijon mustard, sauerkraut, pickles and Russian dressing on a freshly baked caraway seed bun, you can have the burger all month long.

In honor of National Deli Month, Kenny & Ziggy’s New York Delicatessen & Restaurant, 2327 Post Oak, is offering a three-course, multiple-choice menu ($ 38) for lunch and dinner, with 10 percent of each meal sold to the Holocaust Museum Houston and provides funding for its educational programs. The special menu is available throughout the month of August.

Sausage festival in the King’s BierHaus

In August it is officially sausage festival time at King’s BierHaus, 2044 East TC Jester, 828 FM646 West. For the whole month, guests can enjoy all-you-can-eat sausages at both locations, from traditional cheese cheese sausages to exotic wild boar sausages and spicy plant-based chipotle links, from USD 12 (traditional only) to USD 15 (all varieties) at both locations.

Enchilada of the month at Sylvia’s Enchilada Kitchen

Sylvia’s Enchilada Kitchen, 6401 Woodway, 1140 Eldridge Pkwy, continues its six-month Enchilada of the Month adventure, which began in July. Chef Sylvia Casares created the Armstrong for August, a nod to the ranch in South Texas and the town near her own birthplace in Brownsville. Armstrong offers homemade corn tortillas filled with traditional carne guisada, garnished with sauce, cheddar cheese, and onions, and served with rice and beans or a Caesar salad, $ 17.50 plus tax and tip.

Month of the Gr8 givings in the Union Kitchen

Kenny & Ziggy’s New York Delicatessen Restaurant, 2327 Post Oak, is taking orders for Rosh Hashana through Monday, August 30th (which starts at sunset on Monday, September 6th). Options include a la carte orders, full meal packages, and quick-breaking platters with highlights from brisket, apricot fried chicken, and stuffed cabbage to smoked fish, deli platters, and more. The order will be picked up on Monday, September 6th, between 8 a.m. and 1 p.m. Go online for the order forms and email www.catering@zigscatering.com, fax 713-871-8884 or call 713-871-8883. The Post Oak location closes on Monday, September 6th at 2pm and is closed all day on Tuesday, September 7th.

Dinner and cocktail launch at Tacodeli

For the first time in its 22-year history, Tacodeli, 1902 Washington, is launching cocktails and beer along with a new evening menu, available from Tuesday, August 24th. New drinks include SenoRita Margarita, La Dama Paloma, and more; Dinner includes Pastor Yucatan, Mole de Pollo, Escalopas Especiales, Arrachera Flank Steak, and Esquites. The new menus will be available in all locations.