First Chew: Contemporary meals and a enjoyable journey await at The Nash in Downtown Houston

The Nash might be Alvin and Dora Murgais first restaurant but they definitely did their homework. It opened on the first floor of in mid-January The star High-rise apartment building (formerly the historic Texaco Building) at 1111 Rusk in downtown Houston. Chef Omar Pereney, who is best known for his work as head chef in the now closed Peska Seafood Culture (albeit still in his early 20s), developed the menu as a consultant. Nash is known as “an American restaurant and bar” – America that is a great melting pot. For this menu, Pereney was clearly inspired by Italian and French cuisine, but there is a sense of fun that transcends those boundaries. A few dishes are reminiscent of India and Malaysia. Others are quirky (or upscale) interpretations of American classics.

The spacious, airy dining room at The Nash. Photo by Phaedra Cook.

While The Nash doesn’t necessarily try to cater to everyone (which rarely works), many guests will find themselves quite comfortable. The spacious dining room is flooded with light and the food is accessible – but that doesn’t mean thoughtless or simple. 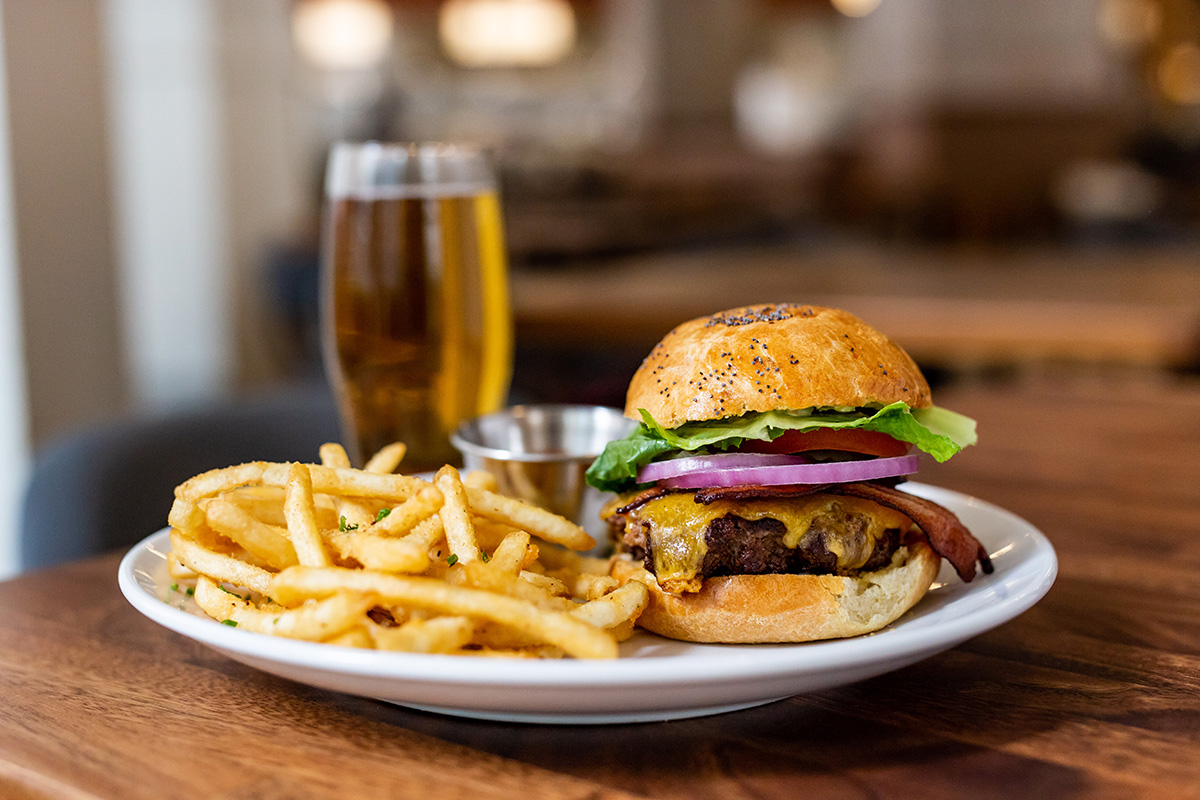 With downtown events and gatherings getting going again, The Nash can cater to the needs of different types of guests. Sports event attendees or concert goers can enjoy a casual meal, and The Nash burger with pecan smoked bacon or that do everything Appetizer – topped with roasted corn, jalapeño, herb crema fresca, aged smoked cheddar, and freshly cut chives – would go right with it. Anyone who wants to sit down for a few cocktails at the bar or a dinner who wants a contemplative culinary tour through the Mediterranean will also be satisfied.

When Houston Food Finder was invited to visit and sample some dishes and drinks, fellow writer Holly Beretto and I took the Mediterranean route – mostly. There was no way we could do without it Prohibited eggs, a beautiful reef in Malaysian egg sauce. In Pereney’s version, the lightly fried, boiled eggs – the yolks still soft – rested in a bath of sweet chilli tamarind sauce and were heightened by the crunch of split, fried shallots. A scatter of ruffled coriander leaves added green color and freshness. If we hadn’t been there to try a range of dishes, I could have eaten the whole plate on my own. 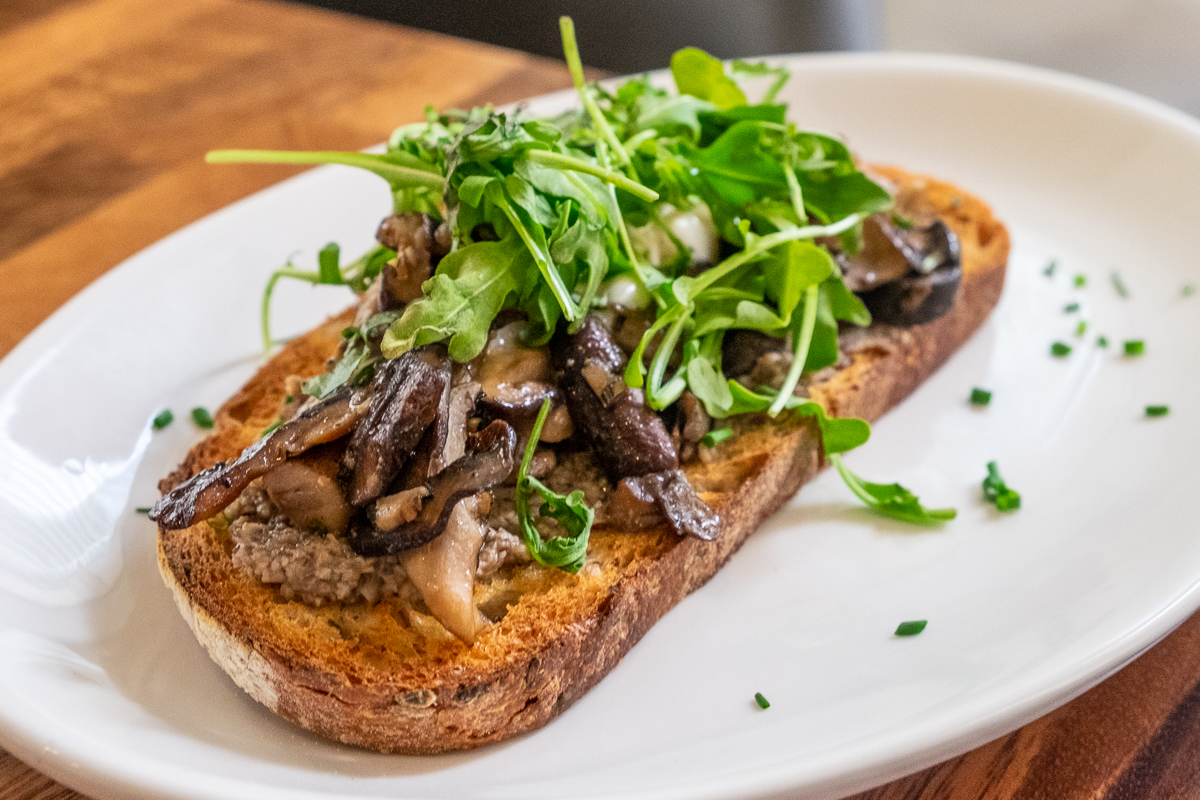 We drove with the noble in Francophile territory Wild mushroom toast. Duxelles (a spread made from chopped mushrooms, garlic, parsley, and other good things) was generously spread on a firm, toasted piece of country bread. There were also fried mushrooms, goat cheese and fresh herbs. The delicate, final touch was an airy Asiago foam. That goodness was only $ 9, and if someone just ordered the mushroom toast and soup for a light dinner before finishing the night, I wouldn’t blame them. 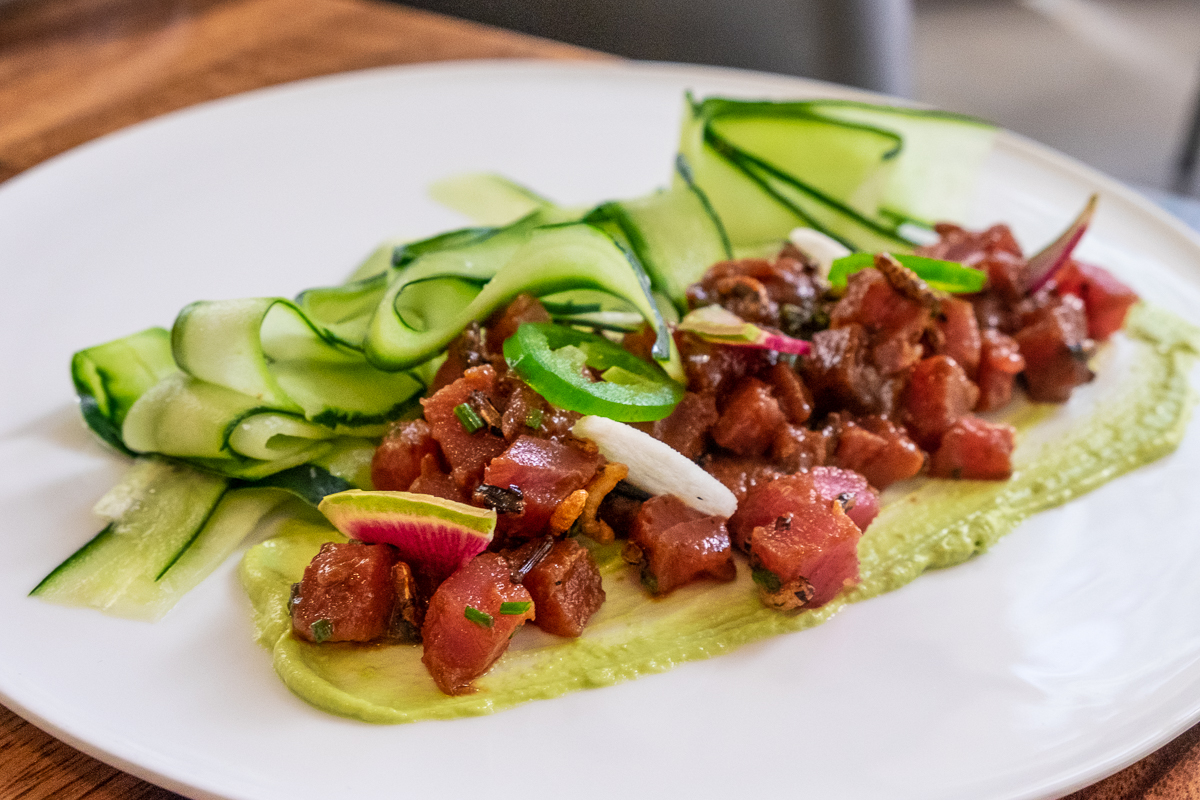 Yellowfin Tuna Crudo at The Nash. Photo by Phaedra Cook.

Pereny’s excellent seafood restaurant in Peska and I was glad to see his Yellowfin Tuna Crudo ended up on The Nash’s menu. Presented in cube form and served with black garlic vinaigrette, it could also be considered upscale poke. Ginger enhanced the Asian flair, but accents of jicama, jalapeño and a creamy avocado puree also directed it towards Mexico. The mountain of shaved cucumbers was pretty, but exaggerated too. Neither my dinner companion nor I touched it. 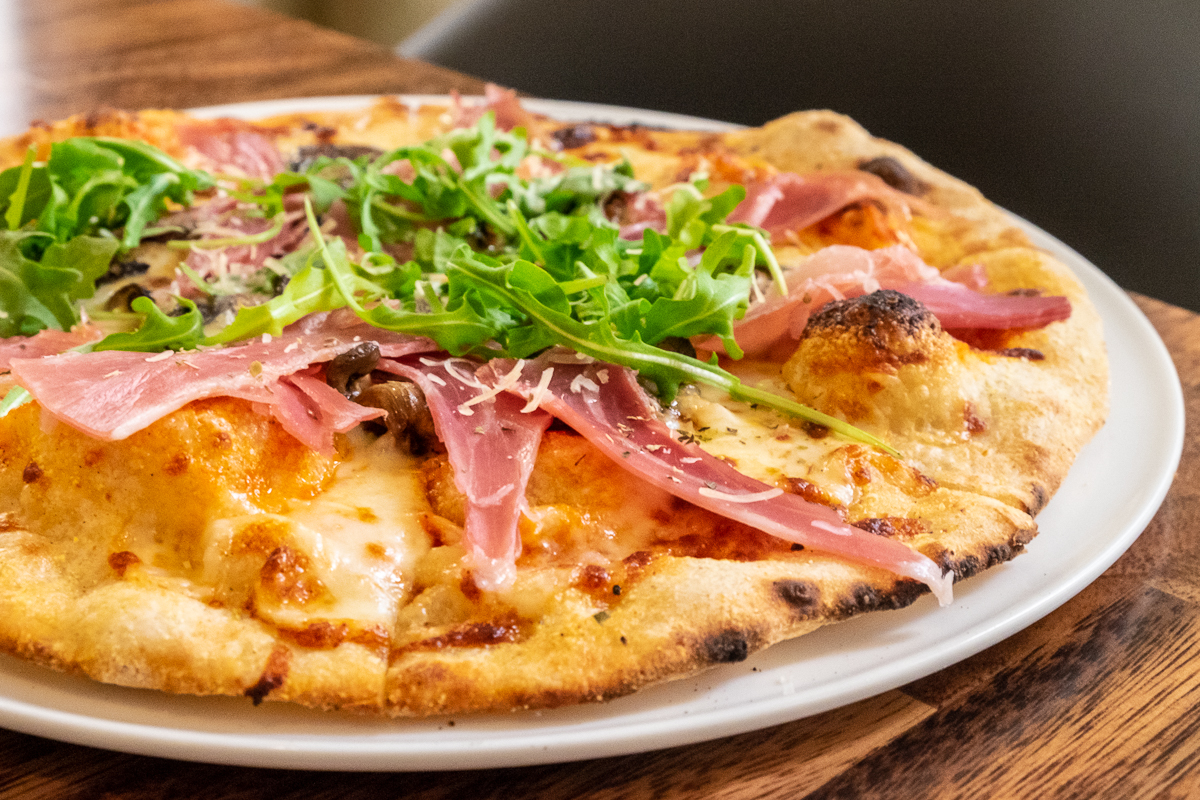 Prosciutto pizza at The Nash. Photo by Phaedra Cook.

We ended up staying on an Italian trail for the rest of the meal. The Ham Pizza is remarkable. For a food nerd, the crust is fascinating as it’s neither Neapolitan crust nor New York style, but somewhere in the middle. Those lovely, cherished charred bubbles are there, but overall it’s good chewing fun. It’s neither crispy nor flabby. They didn’t skimp on the thick, tender prosciutto slices either, and luckily it was uncomplicated with rocket and real Parmigiano Reggiano.

For my taste, the chardonnay sauce is the one Lemon prawn bucatini was a little bland, although I admired the silky texture. (My dinner companion had no such quibbles.) However, there was no argument about the beauty of the dish. On top of the pasta was a veritable garden: roasted broccoli, cherry tomatoes with bubbles, and peas. 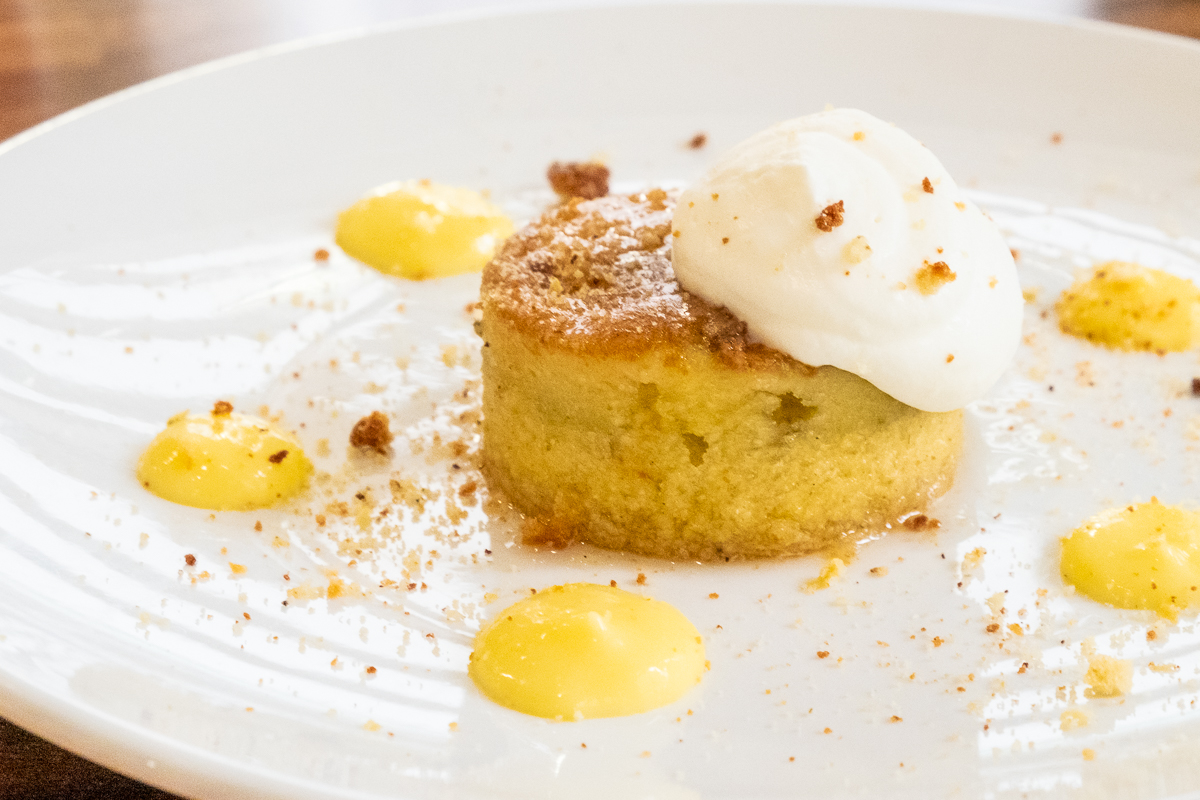 In a restaurant setting, the dessert should serve a few different functions. It’s a satisfying, sweet bite that signals the end of a meal and, ideally, leaves a positive, lasting impression. In the best case scenario, an outstanding dessert not only stays in the memory for days after the visit, but is downright coveted. That’s the case with The Nash Lemon and olive oil cake. When it was first accented with mascarpone and vanilla whipped cream and surrounded by light blobs of lemon curd, it was undeniably attractive. I found the cake the size of a puck a bit small, but my dinner party and I shared it and were not only very satisfied, but loved the fragrant, lemony cake so much that she ordered one to take home with her husband to take.

Soft drinks include house agua fresca, black tea (available hot or cold), and hibiscus iced tea, as well as the usual suspicious sodas and the like.

Those interested in taster discover a world-wide Wine list of around 40 bottles, around half of which are also by the glass. This makes it easy for guests to combine different wines with their dishes during the course of the meal. 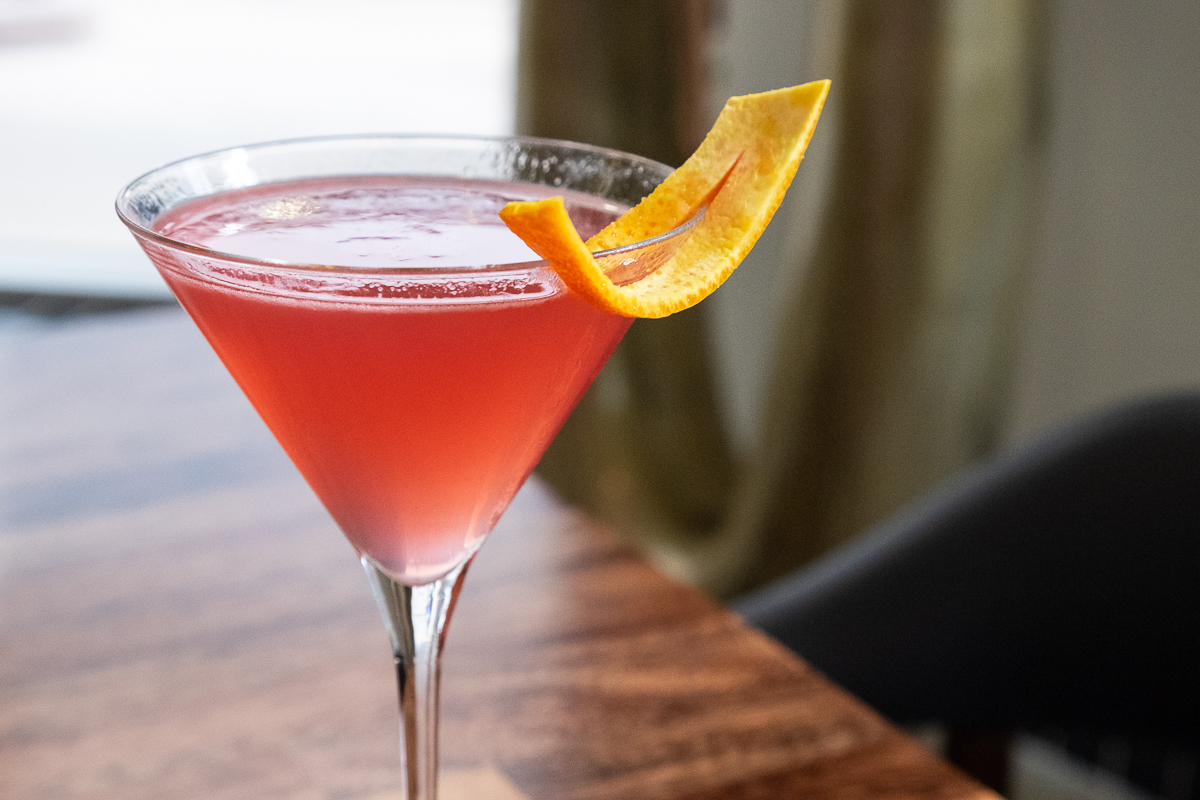 The Arod cocktail (named after owner Dora – backwards) at The Nash. Photo by Phaedra Cook.

We stuck to cocktails for this visit. Among the three we tried, there was a single mistake. The A pole Cocktail is a riff on a cosmopolitan with blood orange vodka, cranberry juice, lemon juice and orange liqueur. I’m a fan of traditionally bitter cocktails, but the vodka carried a thudding note of citrus pulp that threw the otherwise pleasant and attractive drink out of sync. 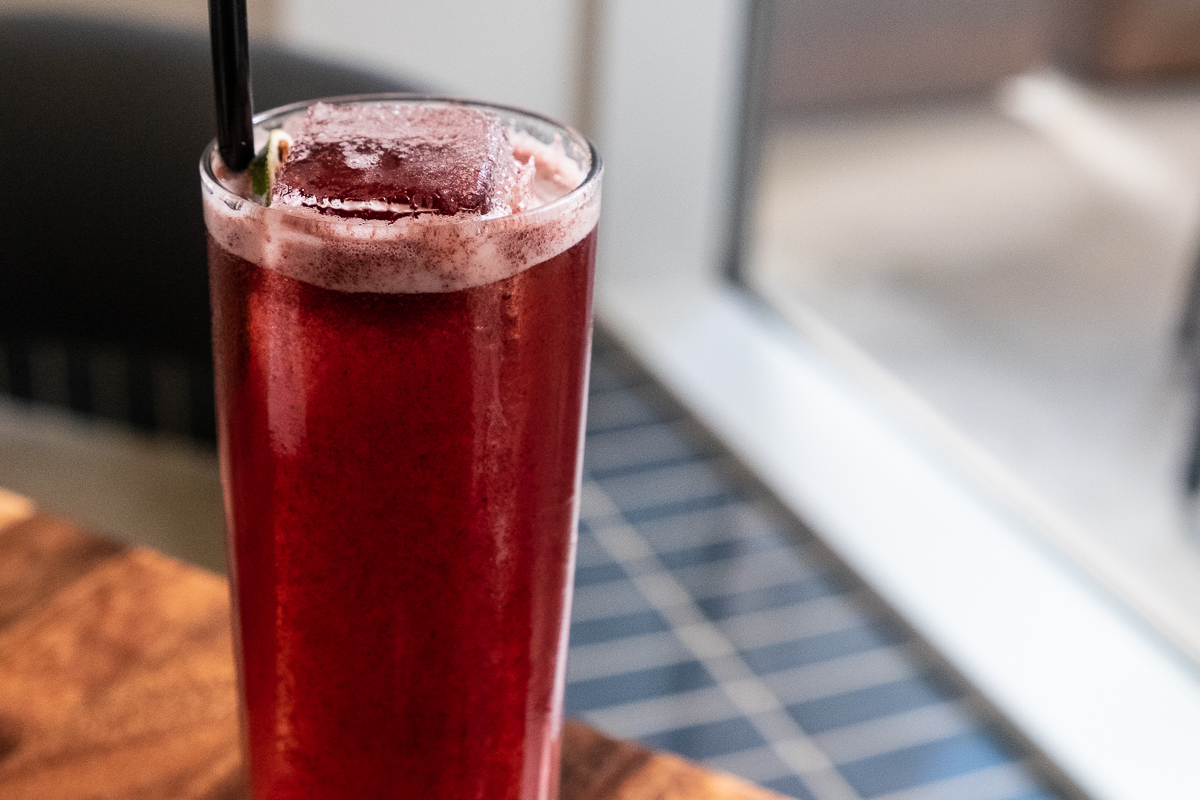 The Tropical Veranda Cocktail at The Nash uses Pimms # 1 – no pickles are needed. Photo by Phaedra Cook.

Conversely, the other two cocktails we tried were not only balanced but interesting. Marigold liqueur bestowed the Red Book Journal, with vodka, lime and prickly pear syrup as supporting actors. Tropical porch was the type of cocktail I would like to see more of: one that uses Pimm’s # 1 liquor that isn’t in a Pimm’s cup. Rye made sure that the fruity drink still had a backbone, and somehow the complex companions of blueberry syrup, lemon, yuzu, coco liqueur, Licor 43 and Spicy Orange Ginger Ale got along just fine.

Guests are eager to get out again and experience a world that is quickly recovering from the pandemic. The Nash’s bright dining room and airy, dog-friendly terrace, along with excellent cuisine, are just the kind of hopeful, invigorating help many of us need to introduce ourselves to the world anew.

Stranded in South America: Couple making an attempt to get house to Houston after journey restrictions on COVID-19 have been tightened in Argentina