On the surface, a meal at Hidden Omakase, located in 5353 West Alabama, has the hallmarks of a traditional Japanese experience. The coatings are beautiful, the garnishes sophisticated and the small bites go through a series of exemplary nigiri before they finish with a light, sweet dessert. However, if you understand a little about the chef Niki Vongthong’s Examining the background and ingredients, the menu becomes a tale of culinary influences that runs through not only the food history of Houston but also that of different countries.

Vongthong is a descendant of Houston’s food scene in every way. Her family was the original owner of the Asia Market, the combination of grocery store and Thai restaurant. “I didn’t want to take over the grocery store. I wanted to learn more about cooking. I wanted to become more global, ”said Vongthong. She attended the Culinary Institute Le Nôtre for a year and then got her first professional job in the now closed Straits in CITYCENTRE. But that didn’t satisfy her culinary wanderlust, so next she did an internship in Spain at the Gulf Resort Hotel – her first time outside the USA. She then returned to Houston and spent six years in Uchi before working under controversial chef Paul Qui at the ill-fated Aqui. 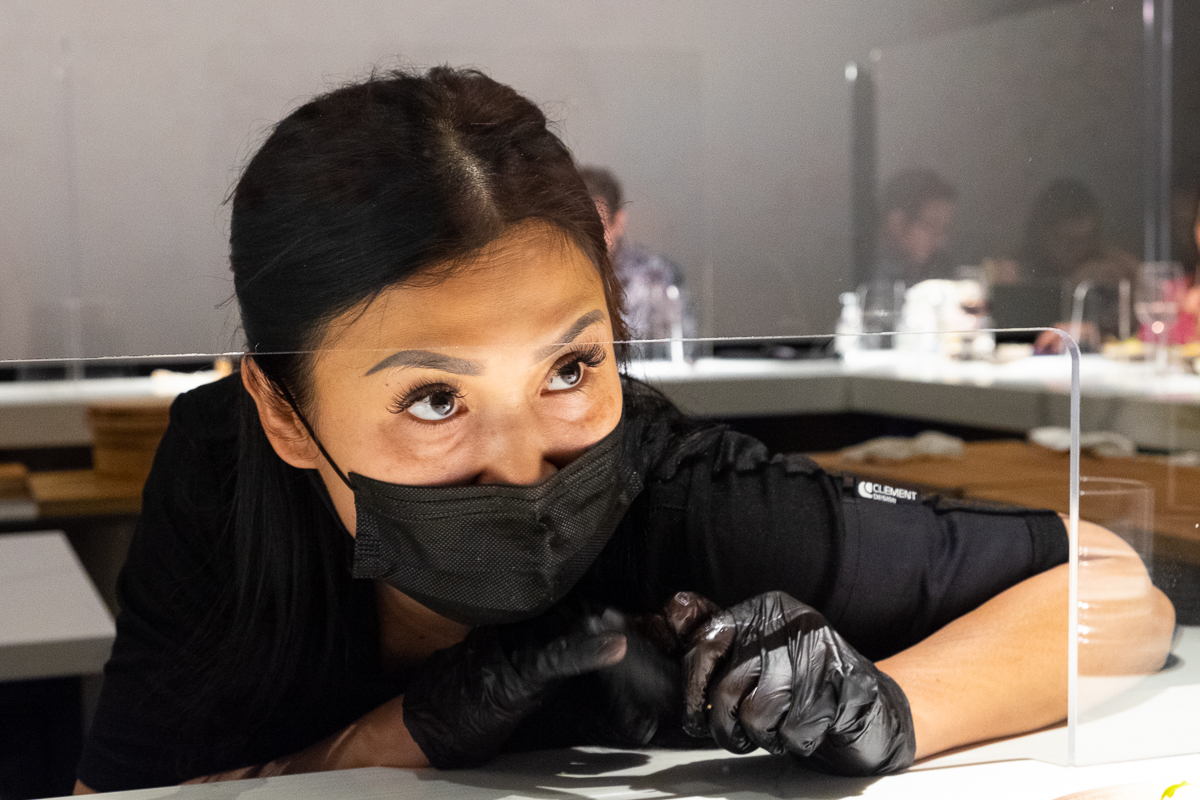 There are many tributes to Japan on the Hidden Omakase menu, such as the notes a dish is taken from. The Sakura Masu comes from Aomori while Kawahagi, aka Thread-Sail Filefish, nods to Oita. The latter is accentuated with a mild, tender piece of fish liver and very tiny, crunchy brine prawns. Another tradition: sailing through a sequence of tuna nigiri in ascending degrees of fat: akami, or lean tuna with a bizarre topping of “bacon” from the fatter toro, chutoro and otoro. 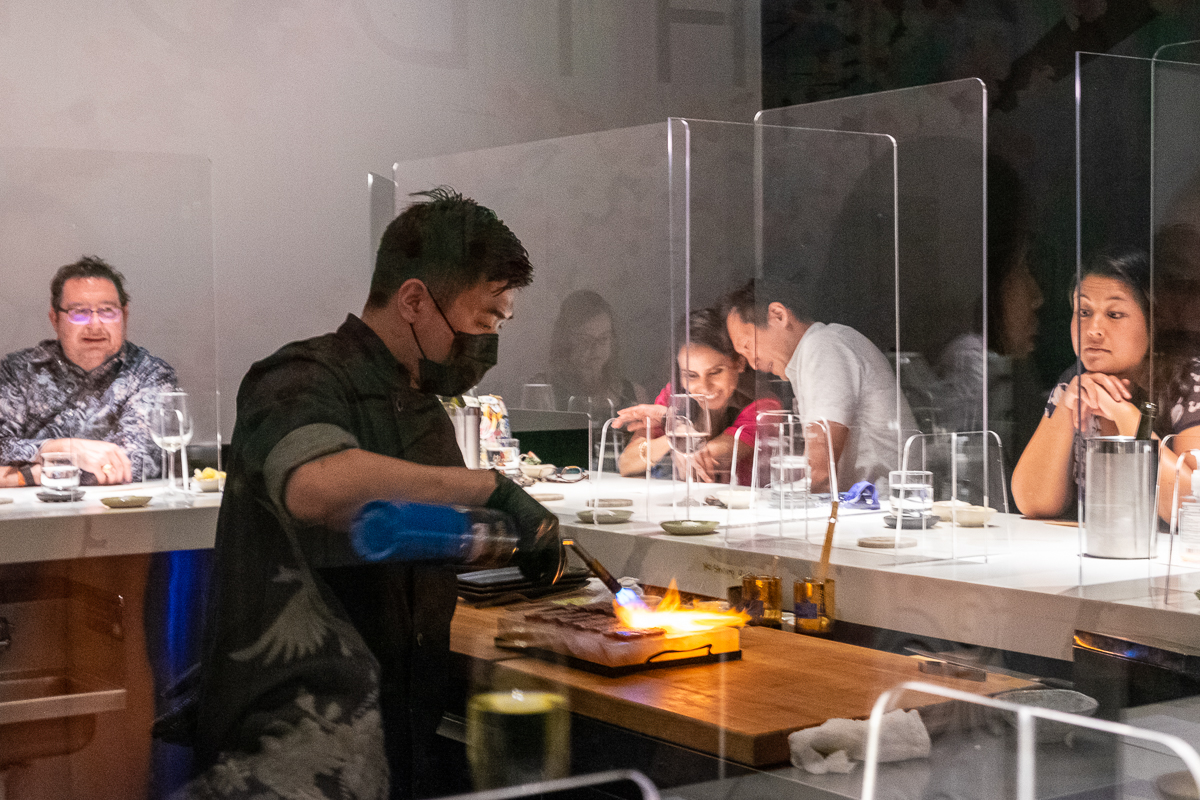 Chef John Pham roast Wagyu for the next course at Hidden Omakase. Photo by Phaedra Cook.

Three courses to my 13-course menu, I thought to myself: “That was a perfect further development.” I had just sworn by one Boomamoto’s oyster accented with icy yuzu slush and silky, emerald green coriander oil, Sakura Masu, silky cherry salmon, which is made even more luscious by its bath of citrus buttermilk and dill oil, and excellent Kampachi, topped with a small blob of preserved yuzu kosho (finely grated citrus fruits together with green chili). 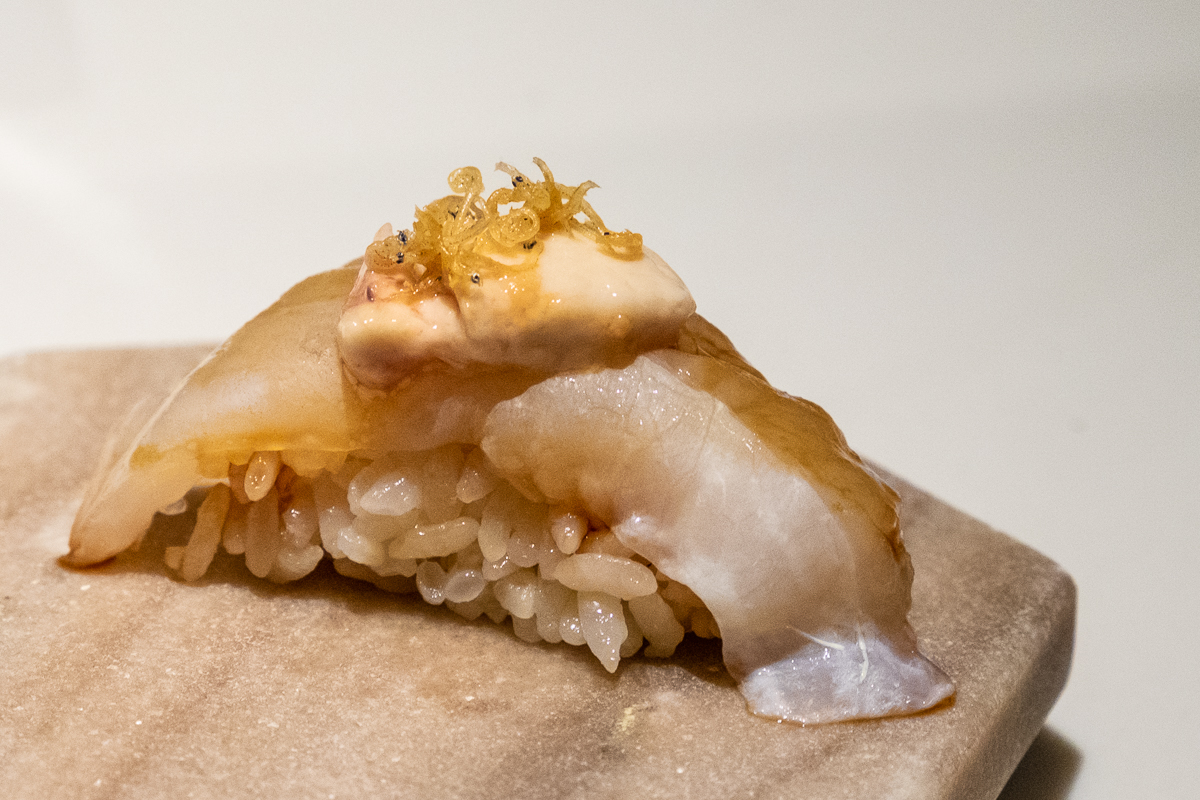 Kawahagi in Hidden Omakase is accentuated with a piece of fish liver and tiny brine prawns. Photo by Phaedra Cook.

All of Vongthong’s nigiri are accented with something that compliments the flavor of the fish. That’s great Kampachi comes topped with a small dollop of preserved yuzu kosho (finely grated citrus fruits together with green chilli). The preserved Yuzo Kosho contains a touch of the Thai cuisine with which she grew up. A pillar of the kitchen relies on fermented and preserved ingredients, including some rice noodles, fish, fish sauce and shrimp paste. “I love anything that is preserved and fermented,” she said. “It just gives it a deeper taste.” 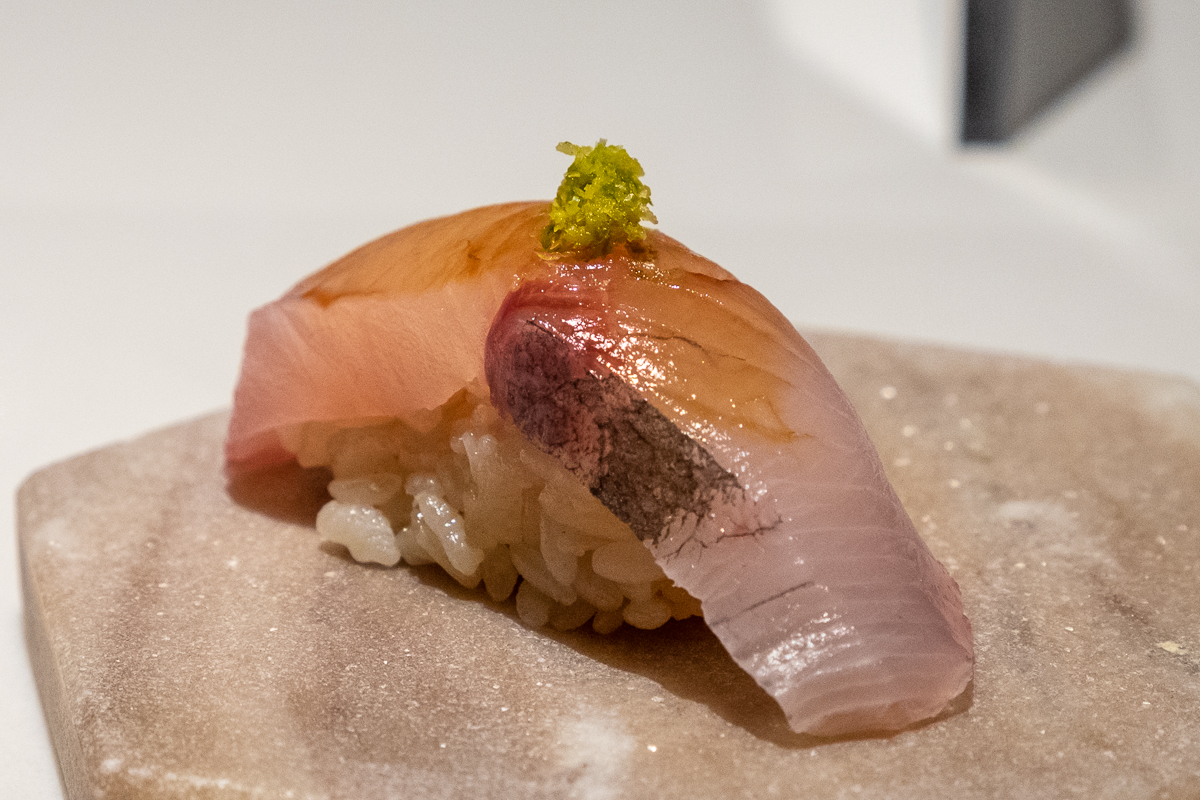 A5 Wagyu nigiri, cut into thin slices and seared in front of the guests in the preparation area, is accentuated with a sprinkling of Perilla (Shiso) seeds from Thailand (sent by Vongthong’s cousin) and Shiso “Chimichurri”. In these sophisticated touches, the influence of Vongthong’s time in Uchi is evident. “Working at Uchi – of course it’s more of a modern type of sushi,” she said. “I’ve had people come over to eat and say, ‘Your nigiri is too spicy and I can’t taste the fish,’ and I say, ‘Are there more traditional restaurants, you know?’ I’m trying not to overdo it, but I want you to be able to tell that it’s my take on nigiri. I like to do something different with it. “

A meal like this almost requires something with foie gras, and Vongthong served a creative twist. It was wrapped in nori, accented with fig and chilli jam, and a triangle of fried chicken skin that towered proudly above it like the sail of a tiny boat. 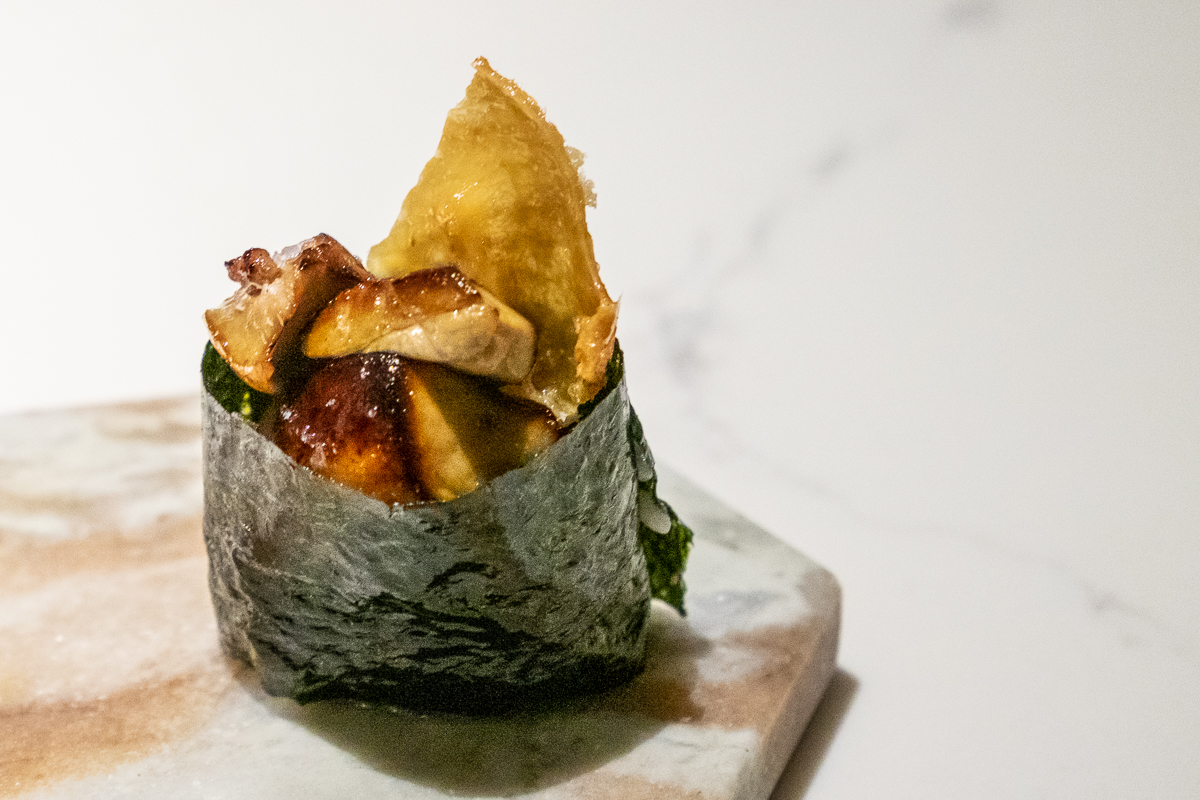 Foie gras with fig and chilli jam and fried chicken skin is getting ready to set sail at Hidden Omakase. Photo by Phaedra Cook.

In fact, something else was added that looked very much like the typical foie gras nigiri presentation, and that wasn’t what made it even more delightful. Instead, it was a solid, rectangular chunk of kinoko, or King Trumpet mushroom seared in brown butter and garnished with mushroom relish. 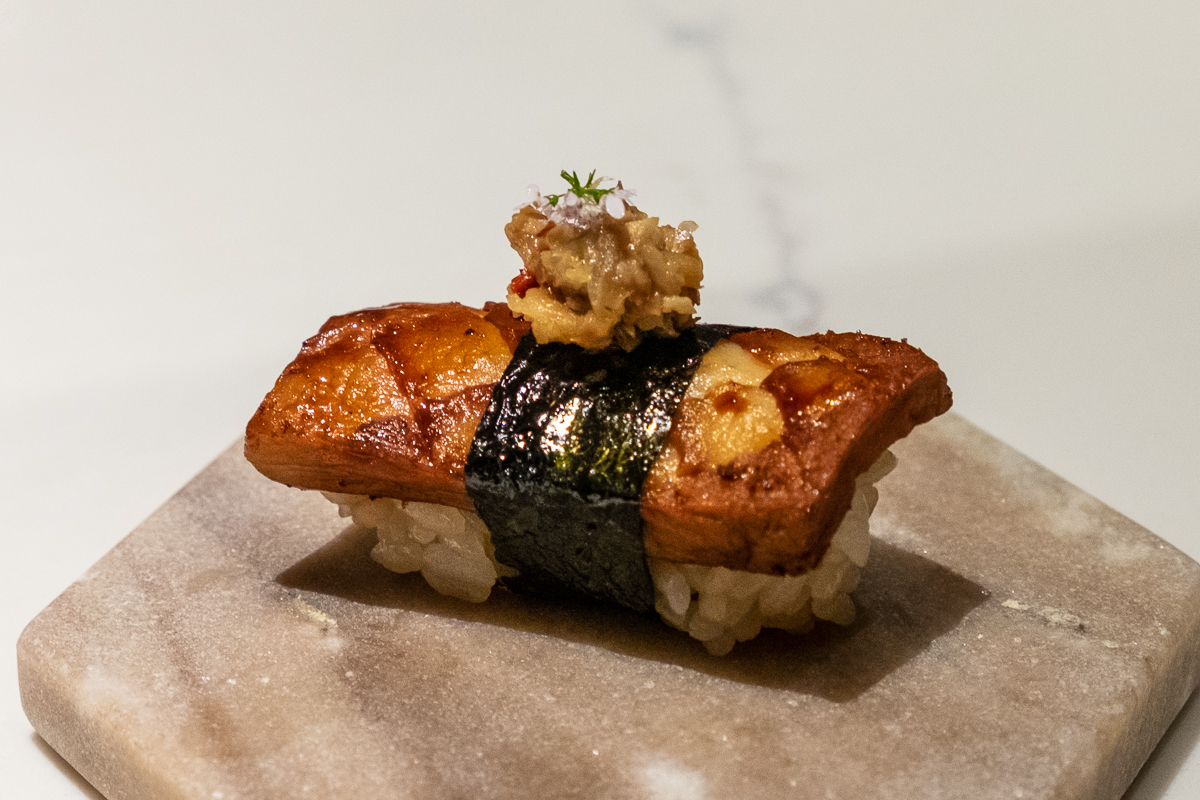 Vongthong sources fish from Japan – but she is not married to it. For example, the Boomamotos oysters that make the first course of my meal come from the Massachusetts coast. It is also Soft shell crab Season, and Vongthong sources it from Maine. 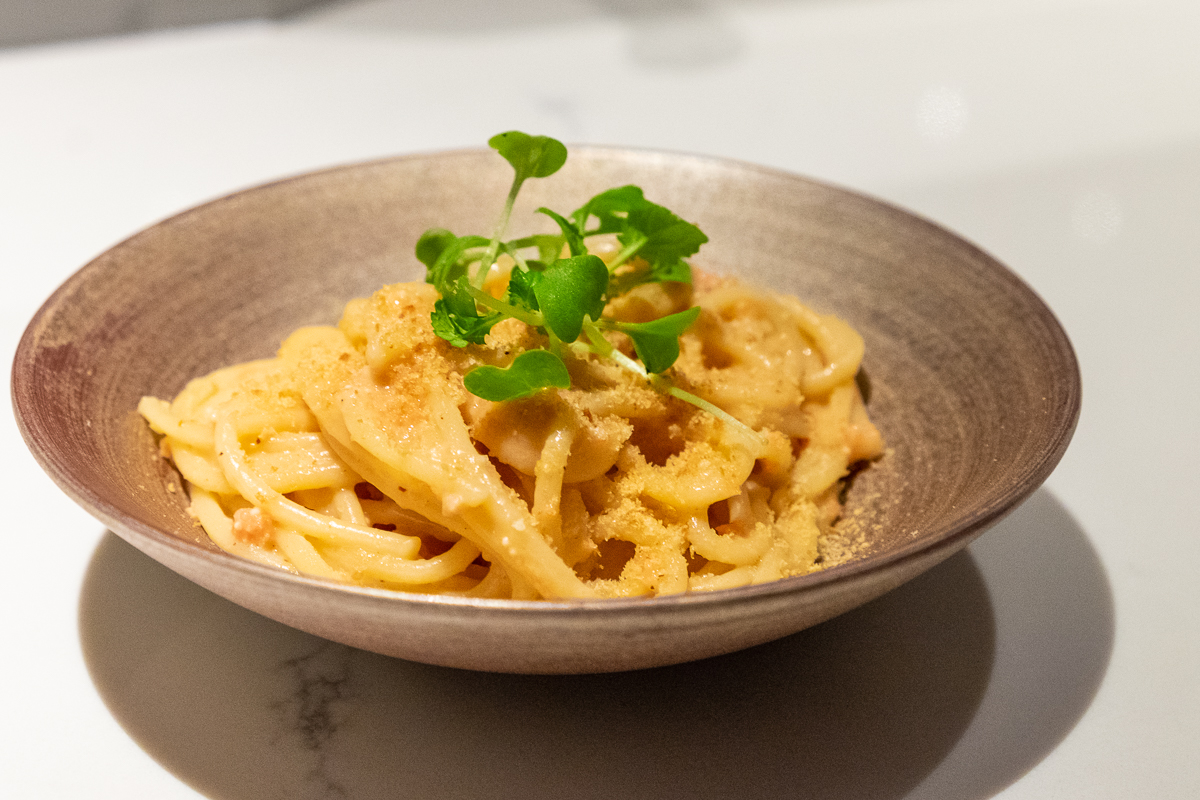 At the penultimate course I almost laughed out loud: Spaghetti that practically melts with fermented roe, parmesan and dried chilli. This last, small, but carbohydrate-heavy dish seemed to be meant to silence the guys who, after a fine meal, show off that they’re still hungry and have to go to Whataburger afterwards. I could only finish halfway. Even funnier: Vongthong admits that she, too, could be to blame for your old Whataburger stop after a fancy dinner. 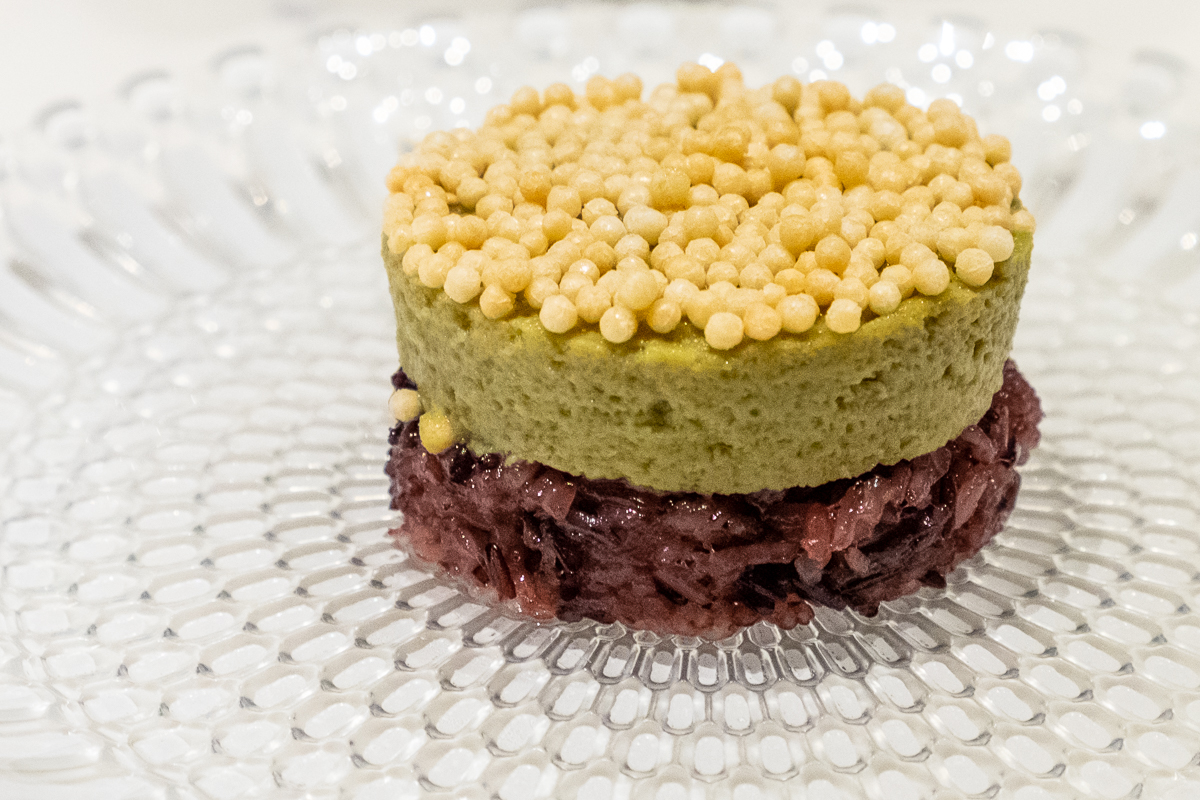 Matcha pudding made from purple rice and topped with tiny, spherical rice crackers at Hidden Omakase. Photo by Phaedra Cook.

Even though I only ate half of my pasta, I would have injured myself if necessary to refine the dessert: Matcha pudding with a base of forbidden rice and topped with pearly Bubu Arare, small, round rice crackers.

A hint that Hidden Omakase is indulging in flights of fancy: the restaurant is hidden behind a shop window with comics. Behind the front door, the dining area is sleek and clear, almost clinical. The pandemic required acrylic partitions between the parties and the prep area – but the small units created by the partitions actually add welcome privacy to the otherwise open space. It’s a little sparse, and I hope that the empty white room on the right wall will one day house a colorful mural.

Originally head chef Billy Kin (recently from now-closed Blackbird Izakaya in the Heights) was in charge of the kitchen, and he brought Vongthong on board and told the Houston Chronicle, “Often times, female chefs are overlooked. Niki has a lot of interesting ideas, but she doesn’t have a platform to showcase them. ”Kin left soon after the restaurant opened, but his advocacy for a cook resulted in Vongthong being one of the few to have a Japanese high-end Kitchen headed. she calls Jimmy Kieu her right hand (which I joked about is now his official title) and John Pham also helps with the procedure.

A meal here isn’t cheap. It costs $ 150 per person. However, guests might be encouraged to know that the traditional cost of such a multi-course experience is reduced by the fact that Hidden Omakase is BYOB – at least for now. A liquor license is pending, according to Vongthong, so take advantage of this situation while you can. (Even though I brought four different types of sake, my meal companion and I happily worked to kill a bottle of champagne throughout the meal.)

Hidden Omakase only has 16 seats (rising to 18 soon), reservations are required, and it has been known that it can take up to two months to get one. Reservations are cleared through Resy weekly at midnight two weeks prior to seating, and at this point it appears the next two weeks have already been booked. Tip: keep an eye on Hidden Omakase’s Instagram account. If there are cancellations or free places for appointments in the near future, the restaurant will publish them there.

Houston Methodist, hospital that has delivered probably the most COVID-19 vaccines in Texas, solutions questions on distribution